​US stations send SASE, all others send envelope and 2 US Dollars for postage  NO IRC's   NO IRC's !!!

Ok, so the above from Dan about paper confirmation.

I suggest LotW aka Logbook of the World, which is hosted and run by the ARRL, more than likely people want ZS confirmed for DXCC credit, in which case, LotW is the best option and least expensive option. I generally update/upload once a month, around the 1st or so, for the previous months' contacts and if you do the same, if you've worked me, you will automatically get a matched QSL record on LotW and no other action is required.

The station here consists of an IC-7700 with an IC-PW1 running up to 1kW into a HyGain Explorer 14@30m or 100ft above ground on a free standing tower, for 40m a sloping dipole@15m (West) on the low end and @25m (East) on the high end. I have & do at times, run my FT817 on 40m or on 20m & up, but conditions really have to be amazing these days for 5W to do the trick, last 5W contact(s) in my log was in August 2018 with UA4LCH on 20m and prior to this in May 2013 with FR4OX on 10m and prior to that in April 2013 on 20m with W0WP during some local/ZS, QRP contest (also a bunch of local 40m contacts - local as in ZS & V5). Life's too short for QRP, but that does not mean one shouldn't run QRP occasionally when conditions allow. (Or even that one shouldn't clean out ones ears and work a few QRP stations when they can be heard, even though they may be somewhat less strong than the BIGGER stations.)

If you zoom in and look carfully you can see the 40m dipole tied to the tower and running just faintly to the right of straight up in this picture, the choke/ugly balun can be seen just above the trees, half way to the open Barn in the picture below. 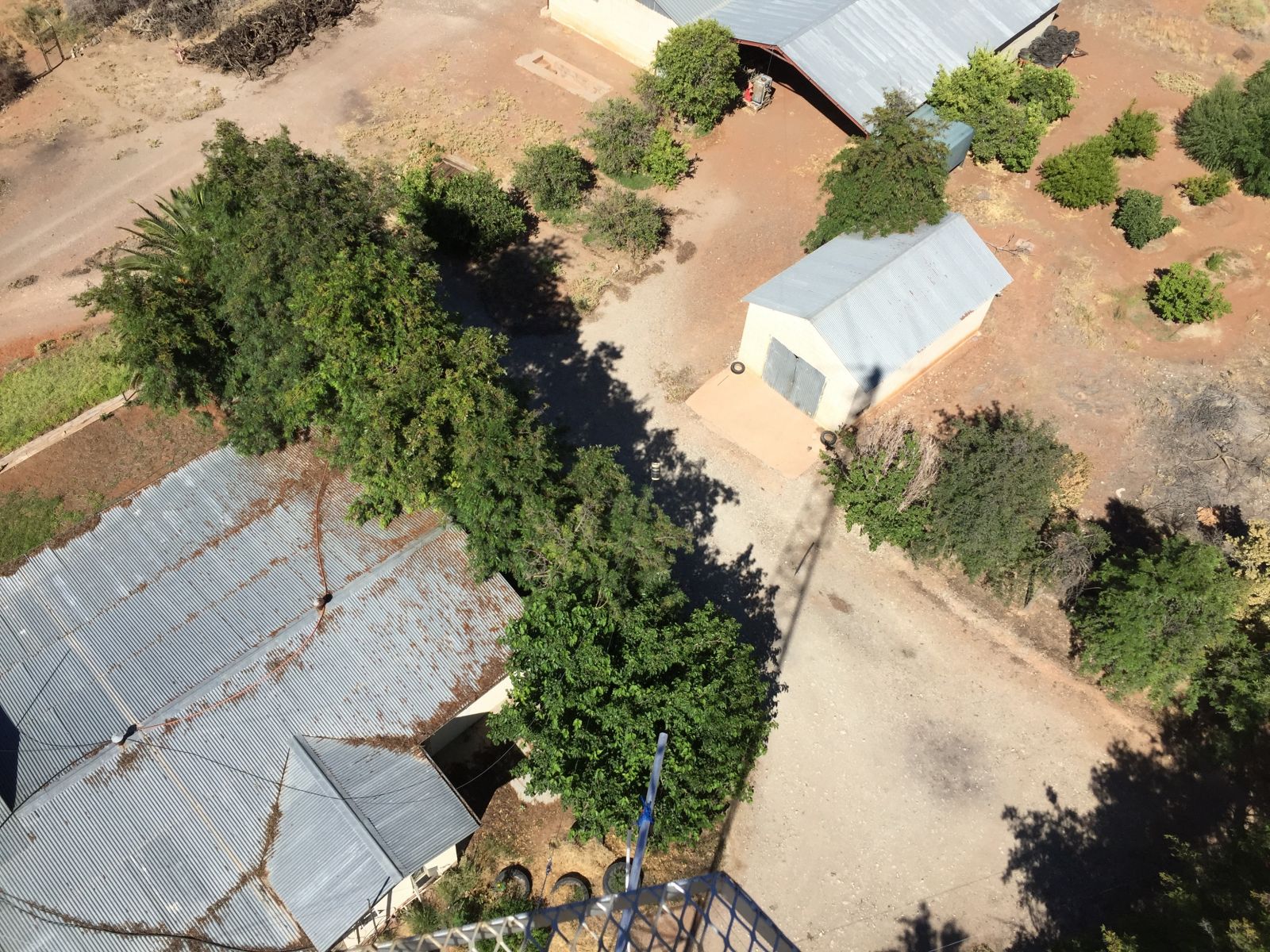 This 30m dipole was removed in December 2018. [I currently also have a vertical dipole for 30m hanging next to the tower, about 4m away with the bottom end of the antenna about 3m above ground level. Using it during daytime with SSB, I seem to cover a radius of up to about 2500km fairly well. Most countries aren't allowed SSB on 30m, Africa south of the Equator is allowed SSB between 10120 and 10140kHz during daylight hours. The coverage is somewhat larger than 40m and amazingly enough, the noise floor is also somewhat lower most of the time, so this band can be a better option for local coverage and even a tad further afield at times, we are only allowed 400W on this one, though, this is still mostly plenty enough.]

The above I've scribbled today the 8th of September 2018 and I'll attempt to update this when things change or anything newsworthy can be reported. - Now making changes on the 20th of December 2019.

Some speculation was made about the hill/mountain seen behind the antenna, it is, I think around 4km to 5km away toward the NNE and not much more than 100m taller than the base of the tower, since the photograph was taken from close to the actual Orange River, with a 400mm zoom lens and a full frame sensor digital camera, back in 2011 and I was around 800m away from the tower, everything in the background also looks a whole lot closer than it really is. That direction would be toward Asia, 4S, VU, etc. I don't think the hill is causing me any real problems, but who knows, maybe the few 4S's I worked are only the tip of the unheard Iceberg that is the hive of activity from Sri Lanka :-) and the 10 times as many VU's in my log, compared to the 4S's are also only a small portion of what I am missing out on, due, to the hill :-) but I seriously doubt it.

Below another view in roughly the same direction from the 29m level on the tower... no major mountain/hill/obstruction... 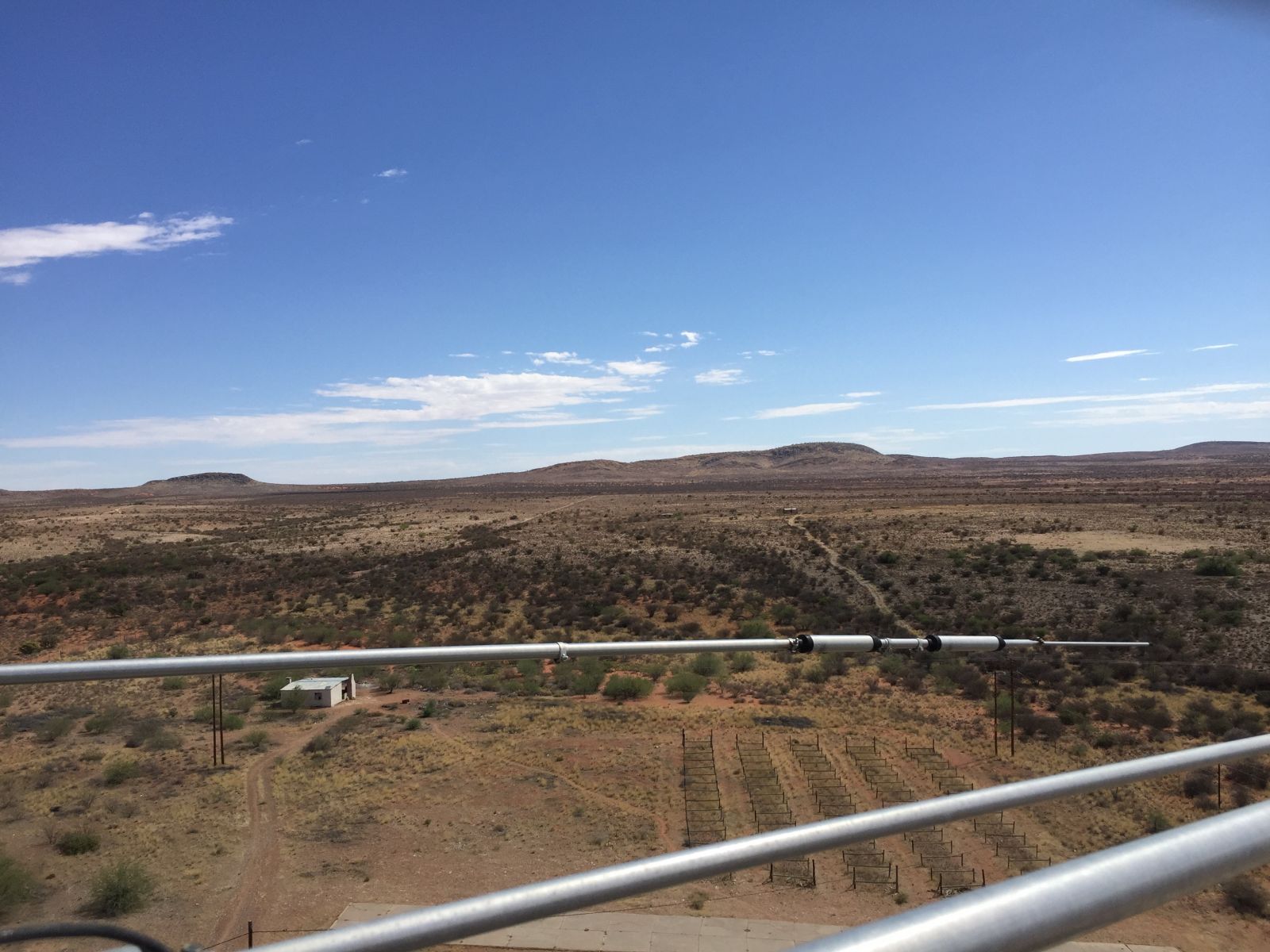 Now in 2022 the river is somewhat full and wildlife is migrating to drier ground... this dude is referred to as a Likkewaan in the local lingo, else see English or Deutsch links. 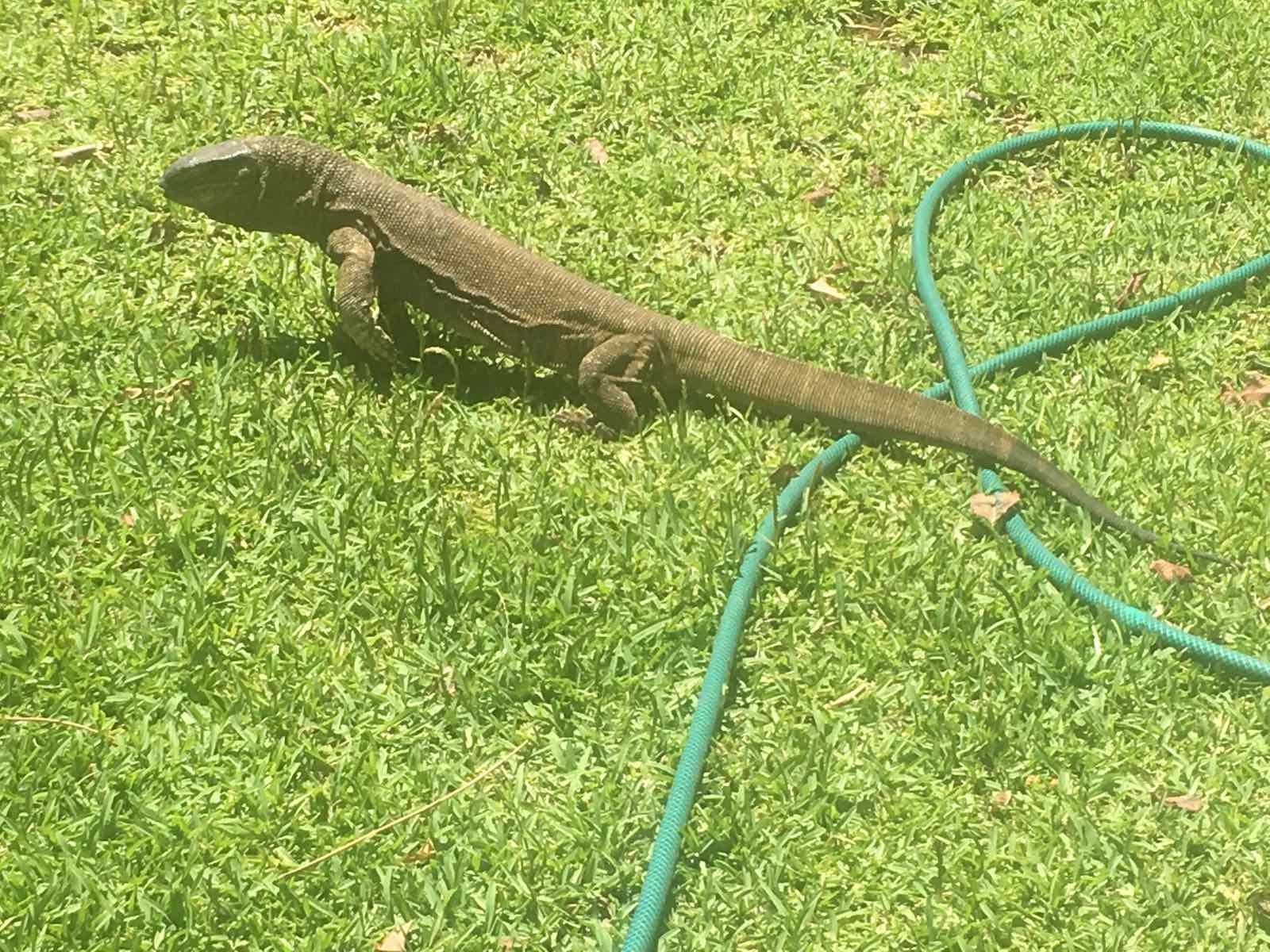 This character is, I think, somewhere between 80cm and 120cm from nose to tail... so a relative youngster and still small, he/she wouldn't stand still to be measured...

A view to the river from the tower on the 1st of January 2022 at around 07:00 local time shows the river water being visible, this is only the case when the river is in flood 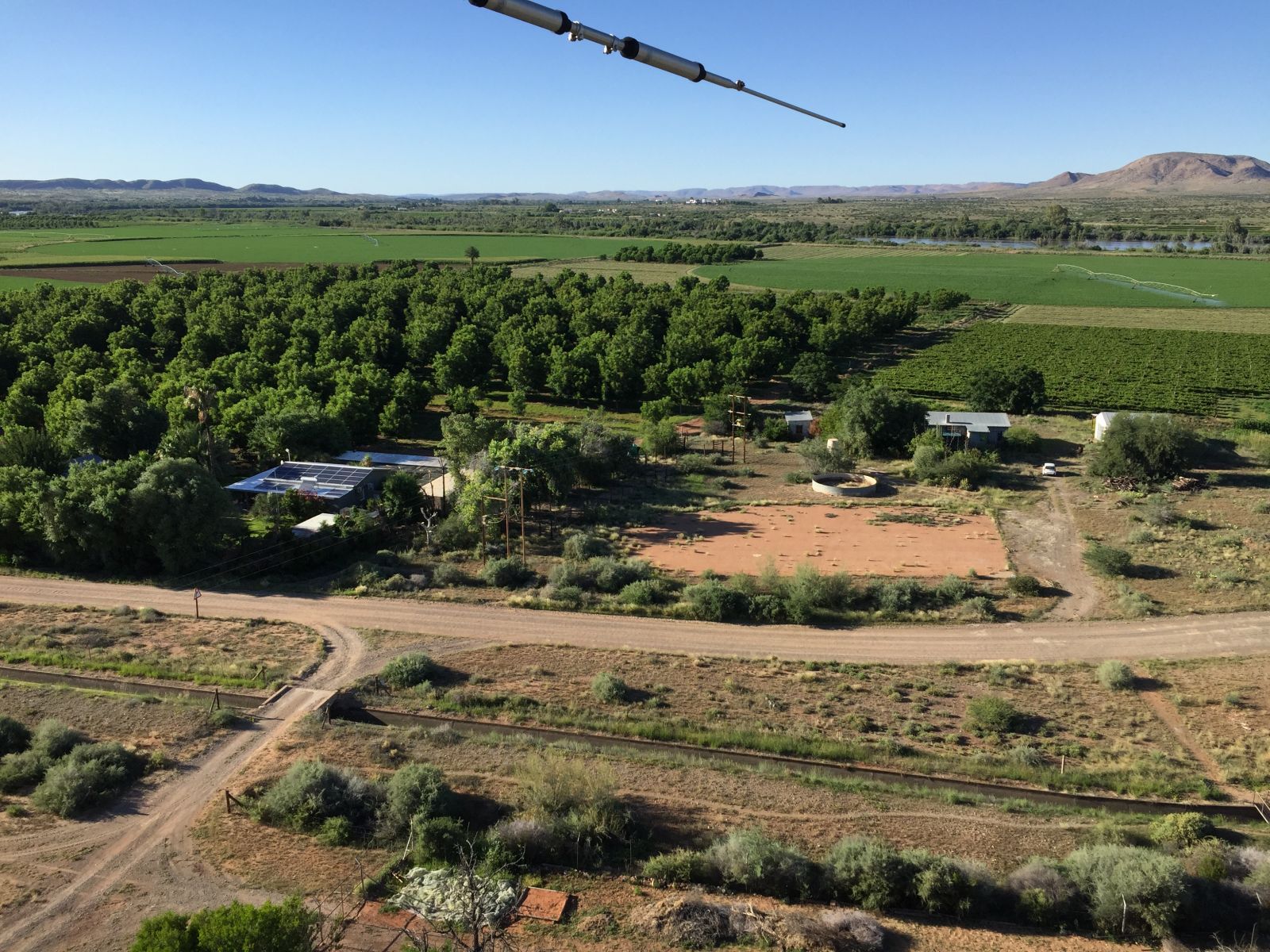 ... today, the 25th of January the water level is even higher... maybe I'll get off my lazy butt early tomorrow and climb the tower with the cellphone in my pocket for another set of photos...