Managed by KB2YSI
QSL via:

I have done all of my satellite operations handheld. I have slowly imporved my setup to make it easier to use, which allows you to focus more on operating than attempting to hold everything! As you can see in the following photo, holding the arrow and the RX HT was a bad idea and quite difficult! As soon as winter arrived, it was even hard to pull this off with heavy gloves on. 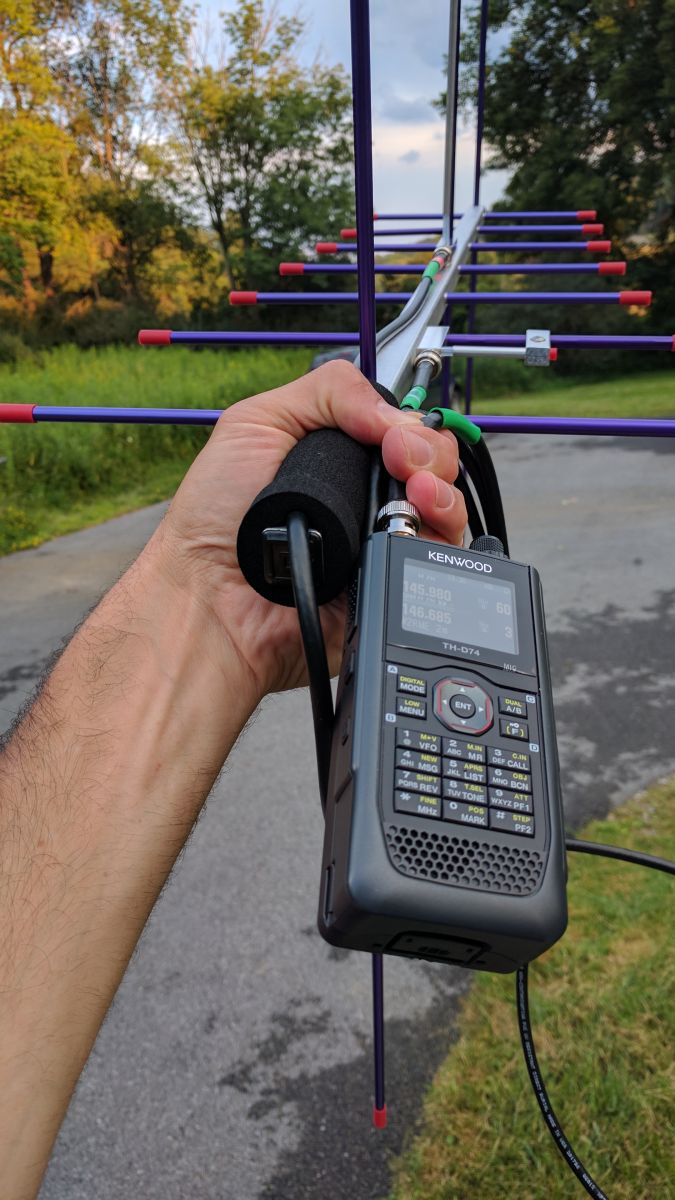 Creating a counter balance to improve the man-protable satellite setup was a HUGE imporvement! Tips and ideas came from K3RRR (automotive battery boot for a belt clip radio mount) and KG5CCI (5/8" wood up the tube) which provided the base for the counter balance. The wood is held in place with a 1/4" bolt that goes through both side of the boom into the threaded holes ment for a tripod. The terrible "blue" handle is a left over piece from a hand pump sprayer; I wanted some insulation from the metal bolt during the winter; it also provides a bit more to grasp. Normally I am only using a few fingers on the handle, it provides enough stabilization and grip to be helpful.

The MFJ-916B duplexer is a bit hefty, so it found had a home held with velcro, instead of being held by coax. Combined with the weight of the HT, holding the setup much easier on the wrist. 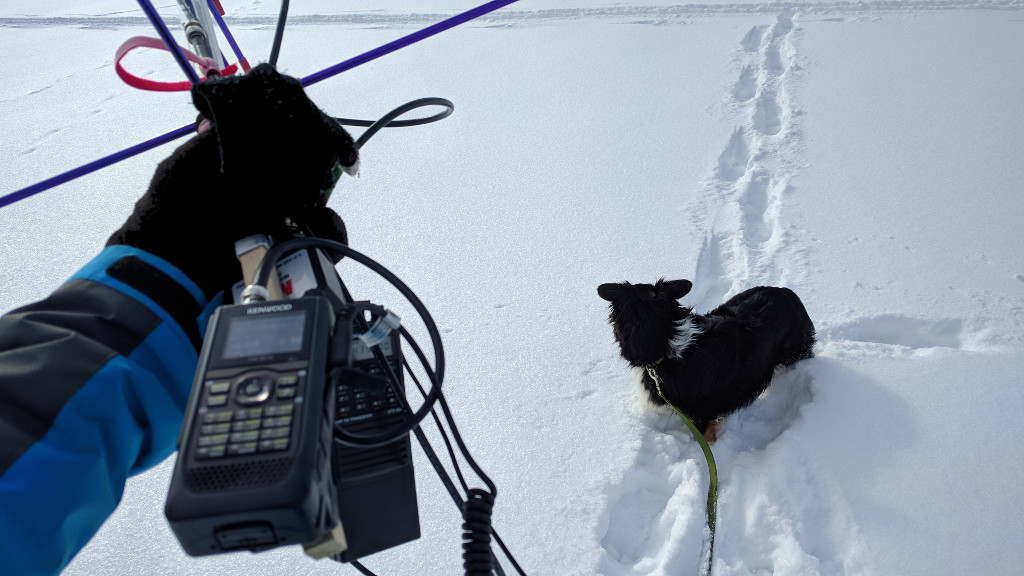 The pouch loves to come out for fun in the snow!

I used to use a 2.5mm to 3.5mm and 3.5mm stereo to 3.5mm mono adapters but this was quite flaky and would cause the HT to crash sometimes during a pass!  The 2.5mm mono plug is possibly the worse holdout in all HT's. They are quite rare, so the cost of hobby parts is high and normally not of great quaility. I was unable to find any headphones that have a 2.5mm plug on them, and with some of the big cellphones moving away from the TRS style, it will be a bigger issue in the future. 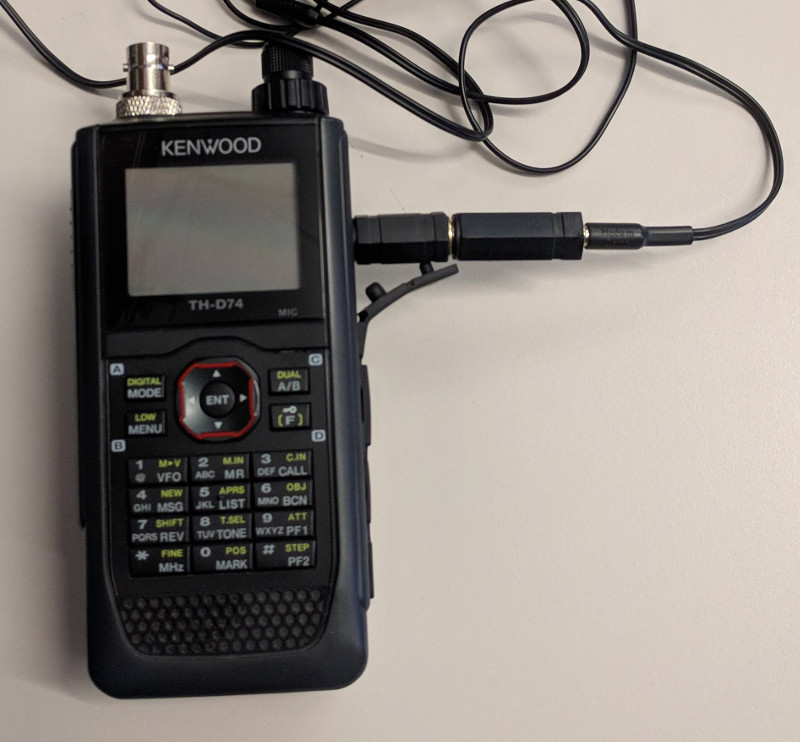 I experimented using bluetooth connection, but it seemed like the audio was quite bad with all of the background noise. I had to find a better way.
I switched to using a hand microphone that happened to have a 3.5mm audio port on it, sadly it is stereo and I loath audio in a single ear, so I use a mono adapter. At somepoint I may open up the mic to see if I can hardwire it as mono. 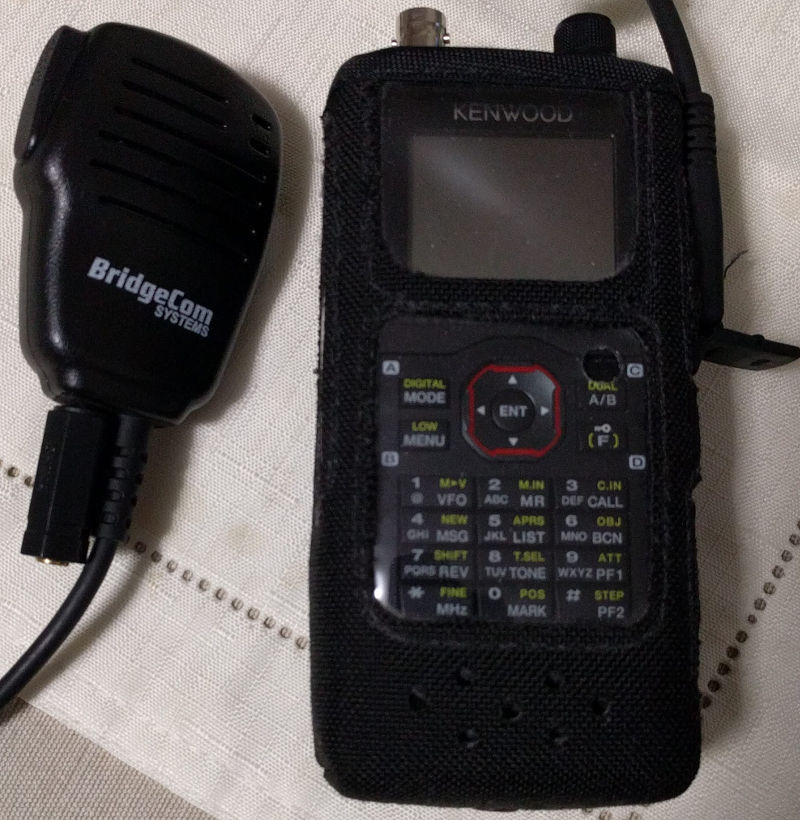 I added a case that had a plastic front to help keep weather off the HT, but it created another issue. During the winter the plastic is too stiff to allow easy button presses. The velcro was roughing up the part that it was rubbing on while putting the HT on and off of the battery terminal holder. So I swapped out the velcro stype straps with QuickStrip / Mille-Tie. They are plastic and reusable, which is key for field operations. They also to not have any sharp point on them like a zip tie would after cutting it to lenght. You can see the stips holding the coax coming from the 2m driven element to the MFJ-916b, and on both sides of the duplexer. I want to figure out a better mounting solution for the duplxer, I may end up 3D printing some type of bracket. 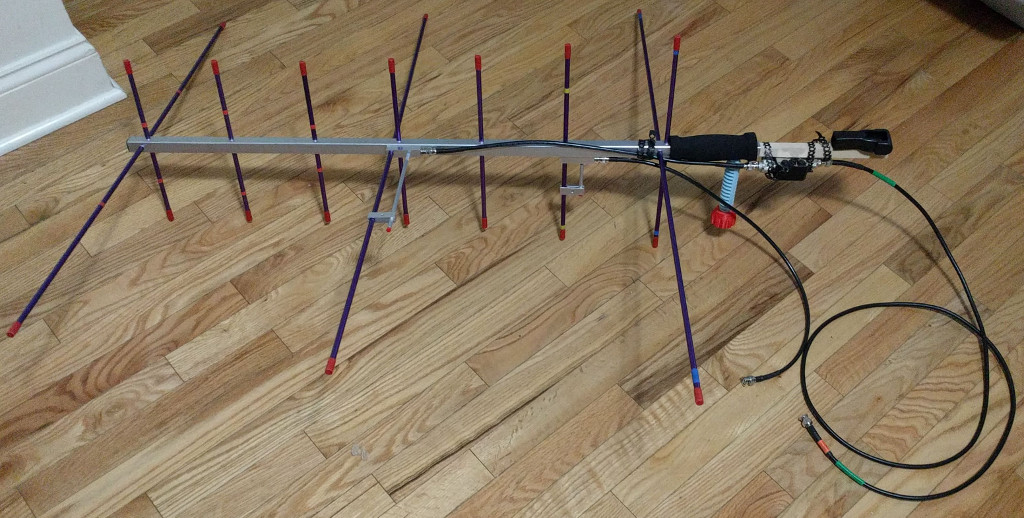 I did 3D print a simple knob for the 1/4" bolt on the handle, it makes it easy to take the handle off when you break down the Arrow II.

Here is a wiring diagram of my setup.  Since I do not have any full duplex radios, I need to swap between SO-50 and the AO birds, I move the coax bewteen the duplexer and the 70cm driven element as needed.  I have a short piece of coax that works well to get to the HT from the duplexer or the driven element. The 6' coax is for the TX HT, as I find it nice to be able to put it in a pocket if needed. 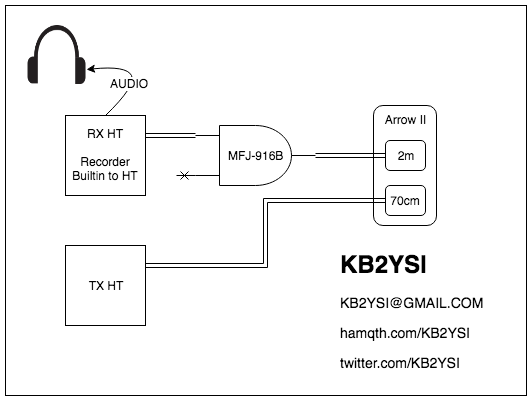 First working prototype IC-7100 frame to get on the SSB satellites. So far, the frame has worked well. The issue is turning via the MIC is in too big of steps, and I do not have enough hands to turn the TH-D74a.  Improvements will be, boom mounted TX switch, and a mic/headset combo.

The frame is made out of Openbeam pieces and brackets (http://a.co/aqDcxFW). I probably would go with the Makerbeam line instead, if I was starting from scratch (http://a.co/7ywmxKv).   Initially it was to verify the layout and such while allowing rapid changes without having to re-cut parts and such. Once I have a setup that I really like and think will work, I am planning on making it out of aluminum stock for less weight and rigidity.